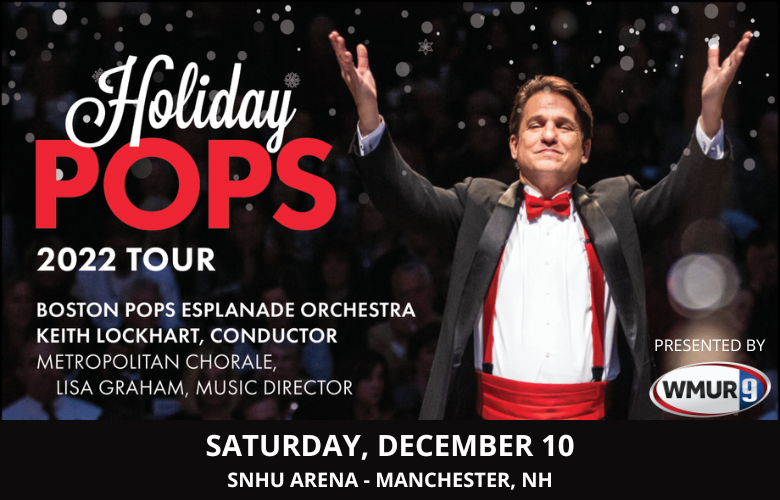 The Boston Pops Esplanade Orchestra is conducted by Keith Lockhart.  The Manchester engagement of the 2022 Holidays Pops Tour marks their 21st performance since the opening of the SNHU Arena in 2001.

Capturing the magic of the Holiday season and the winter charms of New England, the Boston Pops will perform their signature Sleigh Ride, as well as other holiday classics, and new arrangements of seasonal favorites. They are joined by the Metropolitan Chorale, known as one of Metro Boston’s premier choral ensembles. Santa Claus himself will make a guest appearance during the concert’s finale followed by the traditional Boston Pops Holiday Sing-a-long to bring this special performance to a close.  The Boston Pops are celebrating their 136th Season, and Keith Lockhart is entering his 28th year as esteemed conductor for the orchestra.

Holiday Pops began in 1973 under the leadership of Arthur Fiedler with a three-concert series at Symphony Hall called “A Pops Christmas Party.” Since that time, public demand for the performances has continued to grow and the season has expanded to include well over 30 performances each holiday season. In 1978, the orchestra began a new Christmastime tradition of bringing its unique Holiday Pops concerts to venues throughout New England and the Northeast.